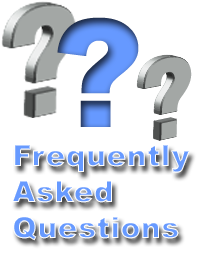 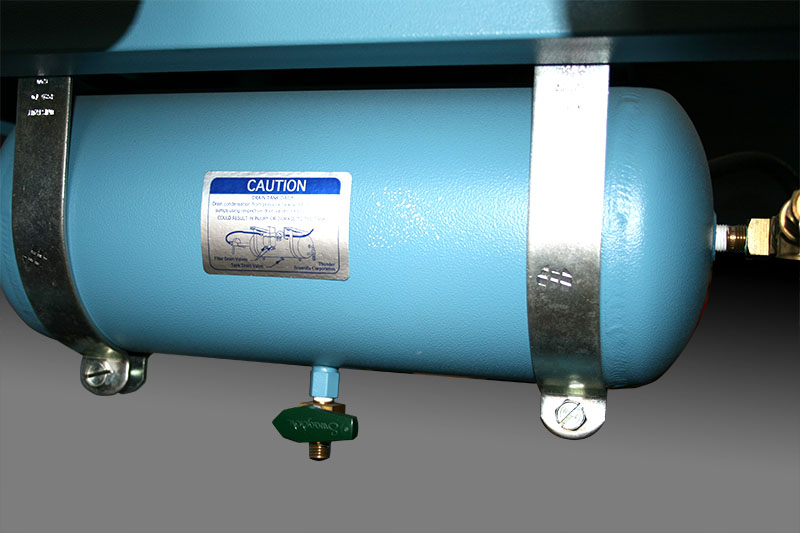 After you are finished doing your calibrations for the day, shut down the generator and the air box as well. Next locate the air supply line at the rear of the system and turn the air supply line handle to the off position. Drain condensation from the air pressure tank using the drain valve located on bottom of the air tank. Open the valve all the way. At the same time you should drain any condensation from the inline air filter sumps using drain valves on bottom of each sump.

This same maintenance procedure can be located in the 2500 system manual, in section 4.3.4 Mobile Pneumatic Cart.

Thunder recommends that you calibrate your system yearly.

You can send your system back to the factory for calibration. Ask about our special transportation shipping cases to ship your generators back to Thunder.

You can calibrate your own system provided you have both a pressure and temperature standards to do so.

Additionally we provide on-site calibration service for two of our generators, which include both the model 1200 and 2500 generators. 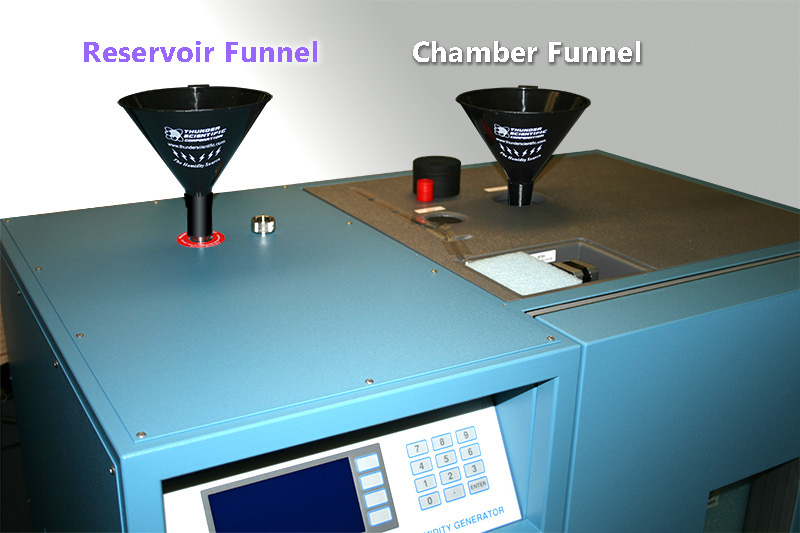 While looking at the front of the 2500 system the chamber is located on the right side, removal of the top right panel is necessary to add the chamber fluid. The fluid that's used in the chamber fluid jacket is 50-70% propylene glycol based antifreeze with the rating of -100 °F (-73.3 °C) or equivalent. Refer to TSD-0207 for chamber filling instructions. 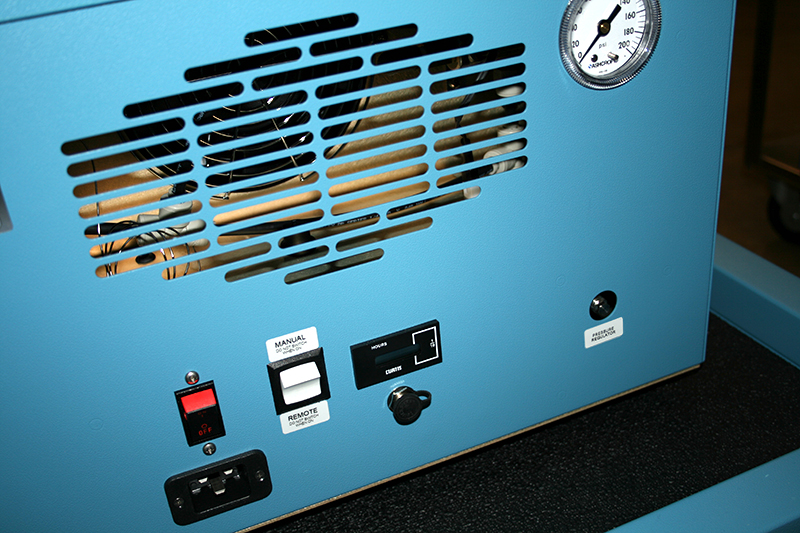 On the left side of the ACS box, there is a pressure gauge and just below that is the pressure regulator adjustment shaft. If the pressure is not getting to 160psi, turn the 9/32” (7mm) adjustment shaft clockwise to increase pressure and counterclockwise to decrease pressure. Make minor adjustments to the regulator to achieve the correct working pressure of 160 PSI. While the unit is running continue to adjust and watch for about a half hour for the air box to warm up to a good working temperature to ensure the proper working pressure has been reached and set.

Note: Pressures higher than 165 psi should be avoided. Higher pressures will be indicated by the "popping off" of the compressor safety valve. 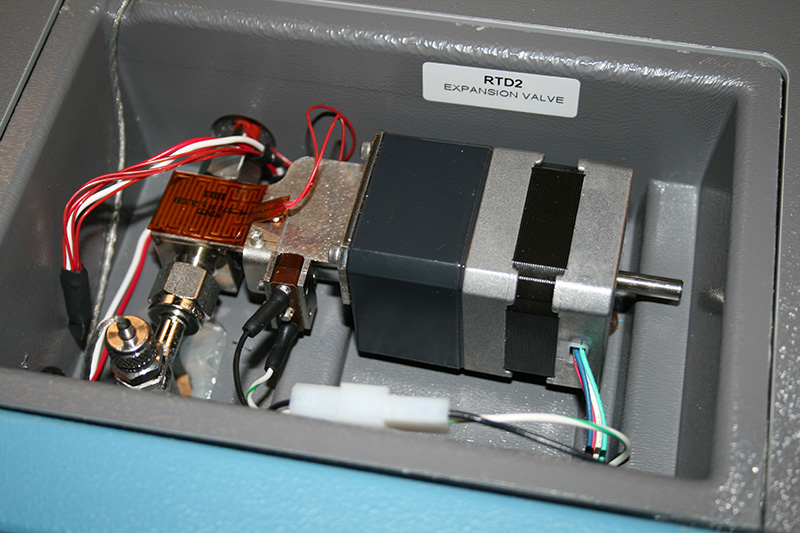 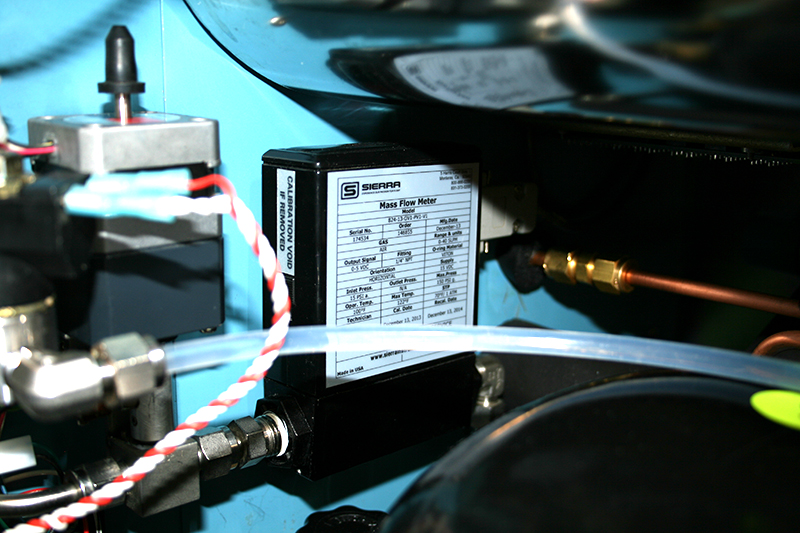 The flow of air is displayed in mass. If you look in the user manual in section 1 page 11 this is where it can be found. The mass flow control system utilizes a thermal type Mass Flow Transducer. Mass flow rates through the generator are manually settable from 2 to 20 L/min by keypad entry. Click on this link to get to the user manual for the Model 2500 for more help and information. 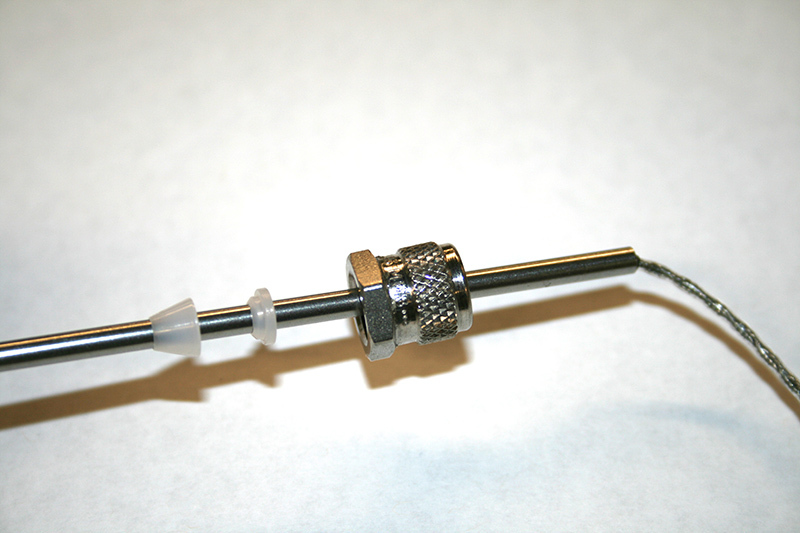 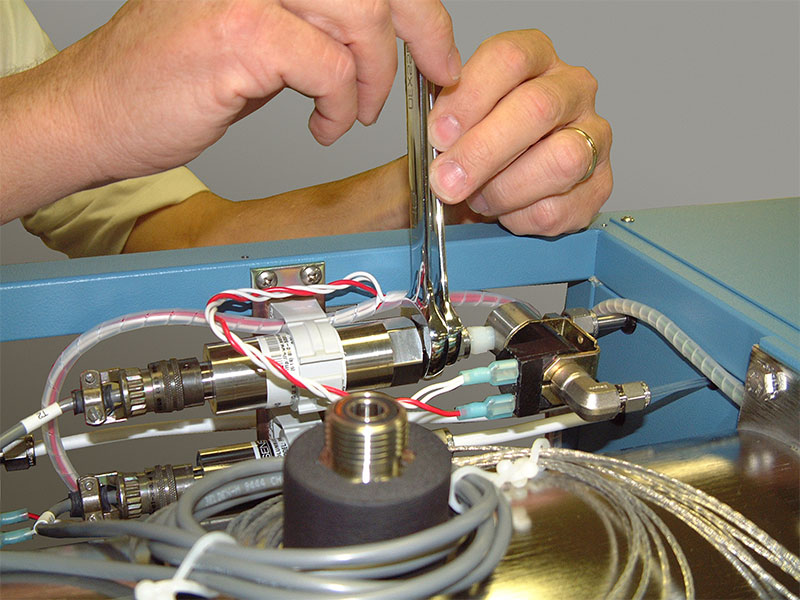 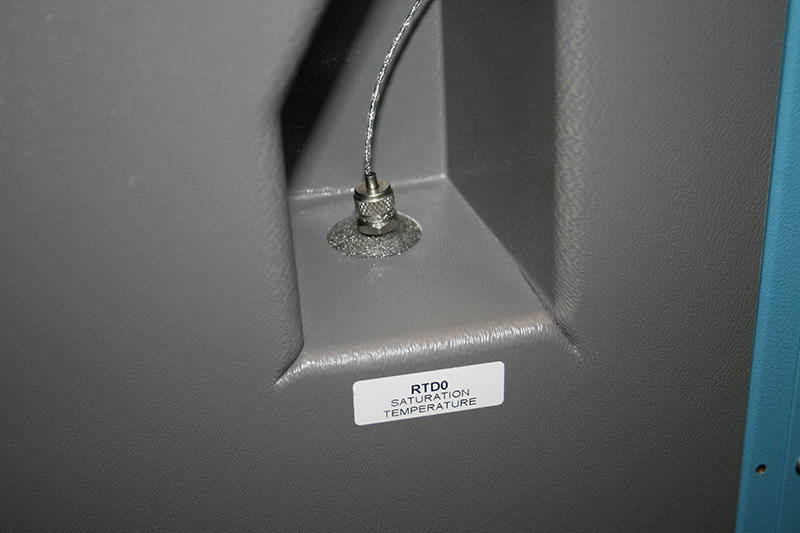 First check the fluid Pump to make sure that it is working and moving the fluid. If the pump is not working check the fuse on the electrical sub panel relay rack. If the fuse or the relay are not working correctly the pump will essentially not run, causing the fluid to not hold an even set point temperature. A couple of other occurrences could be a leak on the AC system or a failed heater.

All too often, chilled mirror hygrometer users assume that below 0 °C, water freezes and therefore, the test instrument's indication is always frost point. This is not necessarily the case. Instead of thinking in terms of water freezing at 0 °C, understand that ice melts at any temperature above 0 °C (+32 °F). To be more specific, the melting point of ice is roughly 0 °C, but only at standard pressure (14.7 psiA). A significant increase of pressure is required to lower the melting point of ordinary ice. We normally see the phase change at the triple point of water (+0.01 °C). Under highly controlled conditions, pure liquid water can be super-cooled well below the triple point temperature without freezing, as long as the liquid is not mechanically disturbed. It can remain in a fluid state down to approximately −42 °C (this is because of the crystalline structures of ice).

In the temperature range slightly below the freezing point, water can exist in a liquid state for extended periods of time. It is this liquid state that is referred to as super-cooled dew. Since it can be in either liquid (dew), solid (frost), or somewhere in between the two, the chilled-mirror hygrometer cannot accurately determine the moisture's current state. Most chilled-mirror hygrometers have this issue; they can display either frost point temperature or dew point temperature below 0 °C. The manufacturer can have the instrument calculate using frost when the value is below 0 °C, but if the moisture in the sensor is still in a super-cooled dew state, an error will be observed. That is why it is critical for the user to be aware that either frost or dew is possible when making measurements from 0 down to approximately -30 °C.

Have you ever put a bottle of soda in the freezer to get it cold fast, only to forget about it? When you remove the bottle from the freezer, the soda inside the bottle may still be in a liquid state. Once you remove the cap, however, the slight jostling and the pressure change inside the bottle cause the soda to begin turning to ice. This is similar to the super cooled dew phenomenon. Although the surrounding temperature is below 0 °C, the contents of the bottle can either be a liquid (dew point), ice (frost point) or a slushy mixture (some value between liquid and ice). This is similar to what can be observed when using, or calibrating, a chilled mirror hygrometer.

For this reason, it is difficult for user’s to make an accurate determination when trying to verify the mirror’s condition. In the calibration lab environment, the actual value across the mirror is known because it is being introduced to the chilled mirror directly from a calibrated humidity generator.

To eliminate the super-cooled dew phenomenon, some instruments have a “Cool” function. When the “Cool” feature is enabled, the mirror temperature is cooled to a value below -30 °C, which, in the majority of test environments, will force the water molecules into a frost state, thereby eliminating the possibility of it being super-cooled dew. When the “Cool” feature is disabled or the cooling cycle complete, the mirror will return back to its original value. One word of caution at this point: It is not unusual for the chilled mirror to overshoot its original value when warming back up from the -30 °C point. The user will want to watch the mirror temperature as it warms to ensure it does not travel above 0 °C; this may require ‘pulsing’ the “Cool” function to slow down the ascent of the temperature as the mirror approaches 0 °C. If the mirror temperature is allowed to travel above 0 °C, the moisture on the mirror will melt and the user will be right back where he/she started, unable to ensure whether the final indication is frost point or dew point.

“Just as good as...” is determined solely by your company’s needs. If the only requirement for your process is traceability, then either calibration service will meet that need. Traceability to the National Institute of Standards and Technology (NIST) does not, in and of itself, constitute the same level of quality or service as is found in an accredited calibration laboratory. It is, in fact, only one facet of a much more in depth process. An accredited laboratory must demonstrate that it meets a litany of quality and management system requirements, as specified by regulations pertinent to the laboratory’s scope of operations. Thunder Scientific’s calibration laboratory is accredited to ISO/IEC 17025:2017 through periodic audits performed by the National Voluntary Laboratory Accreditation Program (NVLAP), a program administered by NIST. Before granting accreditation status, NVLAP first evaluates the calibration laboratory’s on-site operations and ensures processes and practices are aligned with the applicable regulatory requirements. These include, but are not limited to, guidelines that deal with demonstration of technical competence, quality of service, personnel training, traceability to NIST, document and records control, how the laboratory addresses risk, confidentiality, impartiality, and much more. If you find that you require an accredited calibration for your humidity, temperature or pressure instrumentation, our sales and technical staff can answer any questions you may have and arrange for calibration by our NVLAP accredited calibration laboratory.

Thunder Scientific has worked with many customers who are involved with product development. Please contact us. We will be more than happy to discuss your unique situation and develop a calibration that meets your individual needs.

A significant piece of Thunder Scientific’s 50+ year legacy is our reputation for placing great value on our relationships with our customers. Our support does not end with the completion of the sale. Be it technical advice or service, a conversation to clarify the intricacies of moisture measurement or measurement uncertainty, or guidance as to the best way to calibrate equipment or utilize our humidity generators, we look forward to sharing information that will improve our customers’ situation and overall satisfaction.

For other technical or calibration questions please call 1-800-872-7728 and ask for a Thunder service representative or a calibration technician for further assistance.

Get a Quote Now